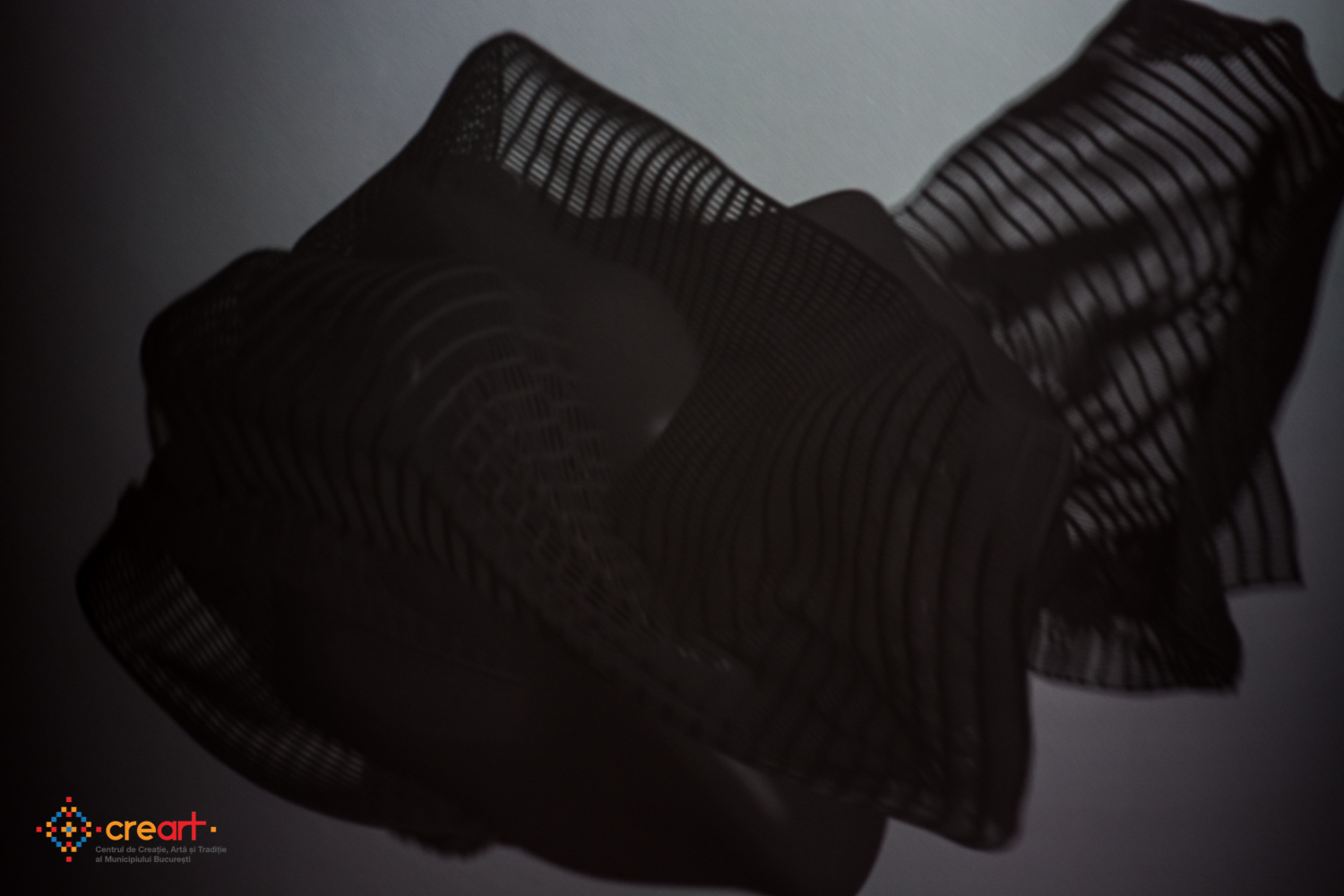 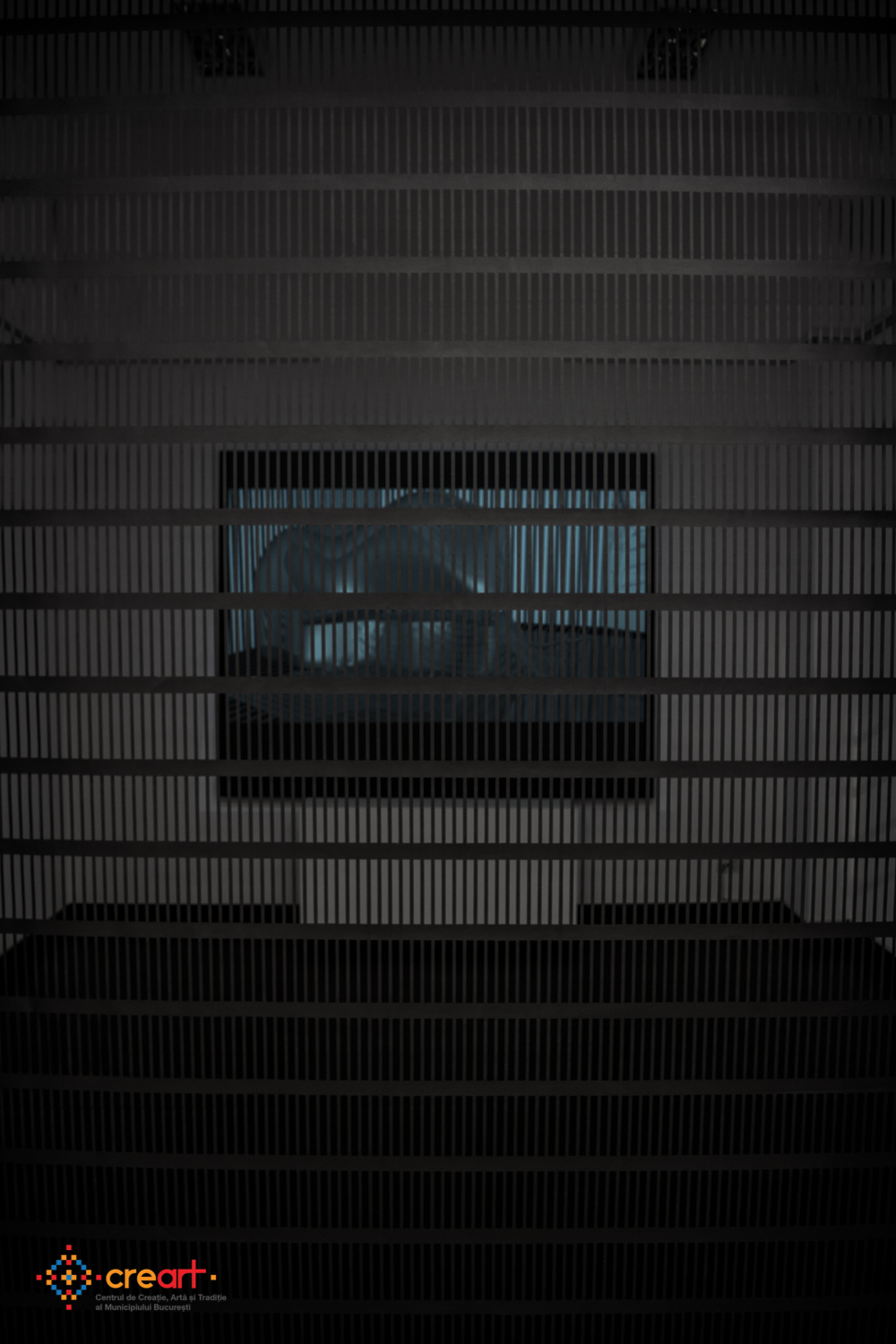 "In “Rooms”, real space and virtual space form a continuum. The virtual is associated with fiction, with the unreal, but it simultaneously points towards possibilities or alternatives that cannot be imagined without using our knowledge of the world, without using patterns - viewed as functional or stereotypical, and that can be formally described as templates or stencils that are built on repetition. Representation is circular: digital objects and material objects are, by turn, representations and represented objects. The extension of the traditional concept of painting in the digital environment and the relationship between painting and time are brought forward. " (Claudia Brăileanu)
"Claudia Brăileanu's works speak of a mechanic aesthetic, based on elements triggered by a mathematical structure, that seems inflexible, very technical and full of 'rigid' meanings. The line, first element in any technique, becomes subject and object for image construction; it unifies two dots or two states. One of the most visible expression of Claudia’s work is the conceptualisation of pattern, as formal expression witch shows a repetition, and representation of authenticity." (Eugen Rădescu, curator)

Claudia Brăileanu (b.1981) completed her artistic education at the National University of Arts Bucharest obtaining a Master's degree in painting in 2017. In 2016 she received a scholarship offered by the Academy of Fine Arts Leipzig. Her recent work shape-shifts between painting and computer generated images. Evolving around an extended concept of painting, the elements that shape the contour of her visual languange are lines and patterns (repetition). In her work, these visual elements become content. She had her first solo show ('Deviations. Line, Pink…Black Square') in 2017, hosted by Mobius Gallery in Bucharest and she participated in group exibitions as Out of the Blue at Mobius Gallery (Bucharest, 2017), StartPoint Prize at Victoria Art Center (Bucharest, 2017), Zum Zoom Zoum at Gapgap (Leipzig, 2017), Rundgang at HGB Leipzig (2017), Dada, adică nu!, at Jecza Gallery (Timișoara, 2016), Bucharest Contemporary/ Reshaping Landscapes at Five Plus Art Gallery (Vienna, 2016) Tendencies in Contemporary Romanian Painting at the Romanian Embassy in Berlin (2015), The Second International Student Drawing Biennial (Sofia, 2014). She lives and works in Bucharest.

Eugen Rădescu is a cultural manager, curator and theoretician, with background in political science (specialised on moral relativism and political ethics). He wrote for various magazines and newspapers. He curated, among others, Bucharest Biennale 1 with the theme “Identity Factories”, “How Innocent Is That?” , “presently i have nothing to show and i’m showing it!” and "Common Nostalgia" at Pavilion Bucharest. He published the book “How Innocent Is That?” at Revolver Book Berlin. He is co-editor of PAVILION – journal for politics and culture and co-director of Bucharest Biennale and the chairman of the organisational board of PAVILION and BUCHAREST BIENNALE. He is member of the selection board at apexart for the programs "Franchise" and "Unsolicited Proposal Program". He held different lectures at several institutions such as apex, New York, Badisher Kunstverein, Karlshrue, Casa Encedida, Madrid, University of Arts, Cluj. Currently he is working on a new book, “Moral relativism – two perspectives”. He is Phd in political science at Babeș-Bolyai University. Also he is professor at Bucharest University and Babeș-Bolyai University, Cluj. Lives and works in Bucharest.