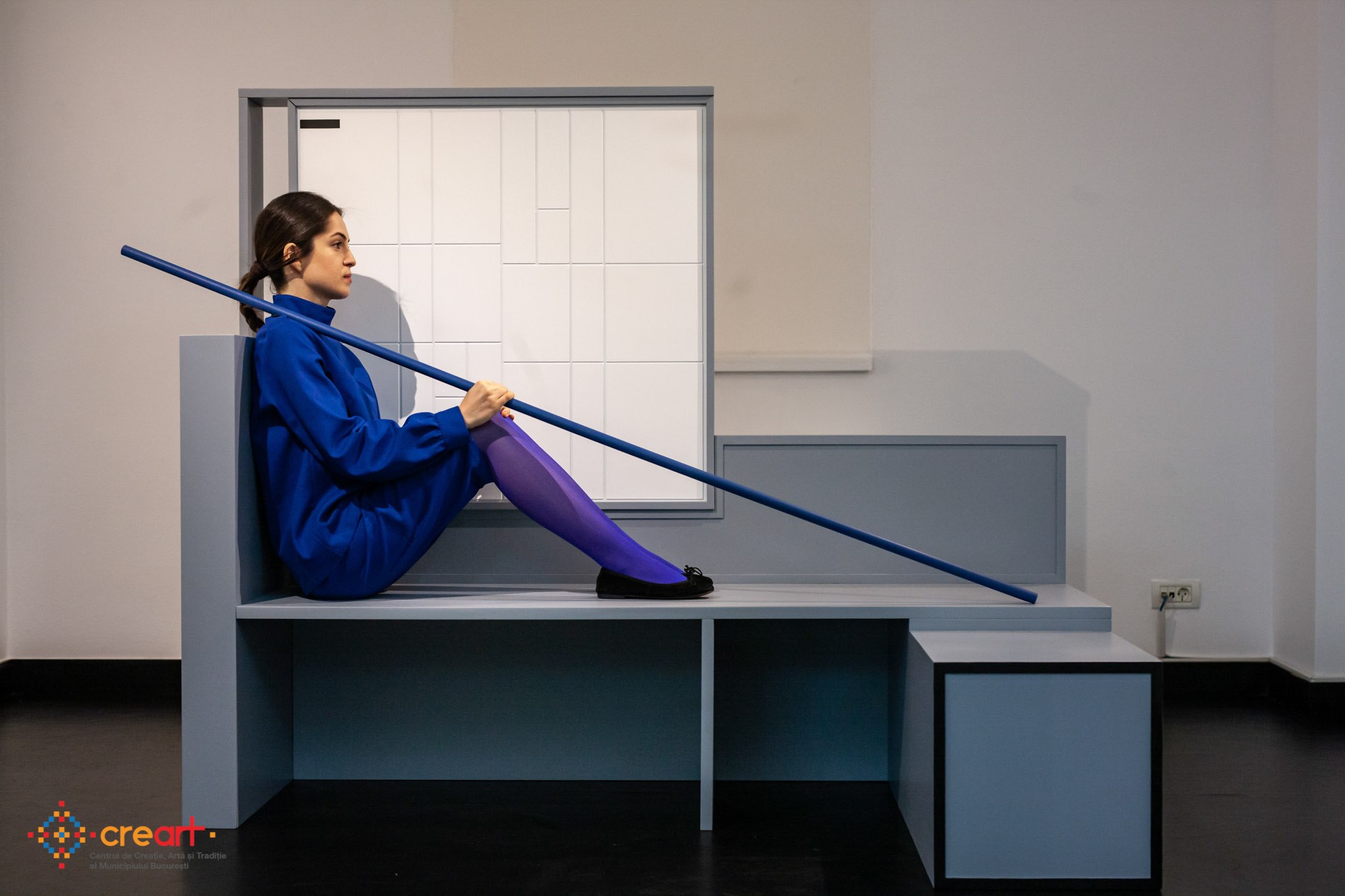 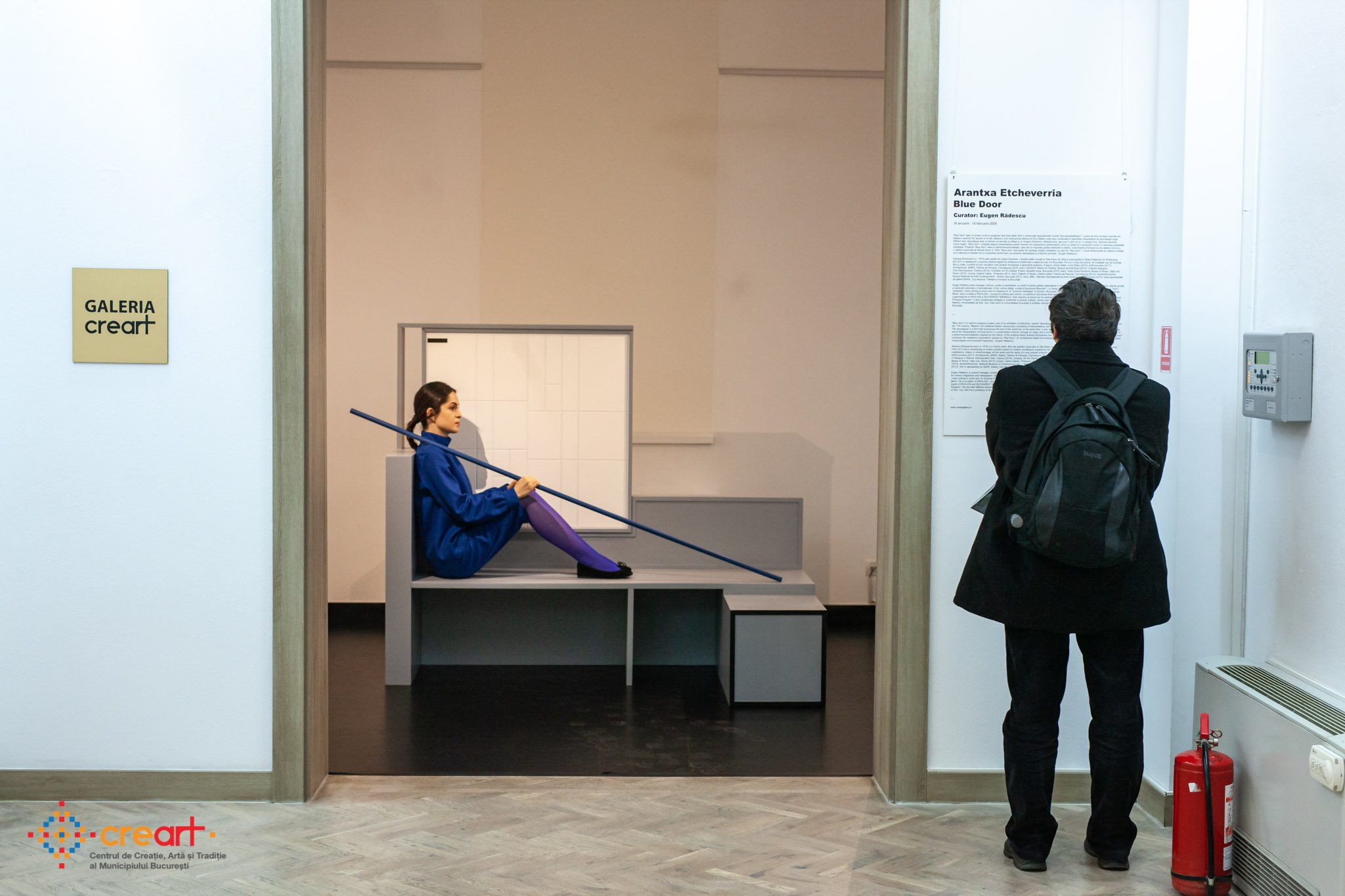 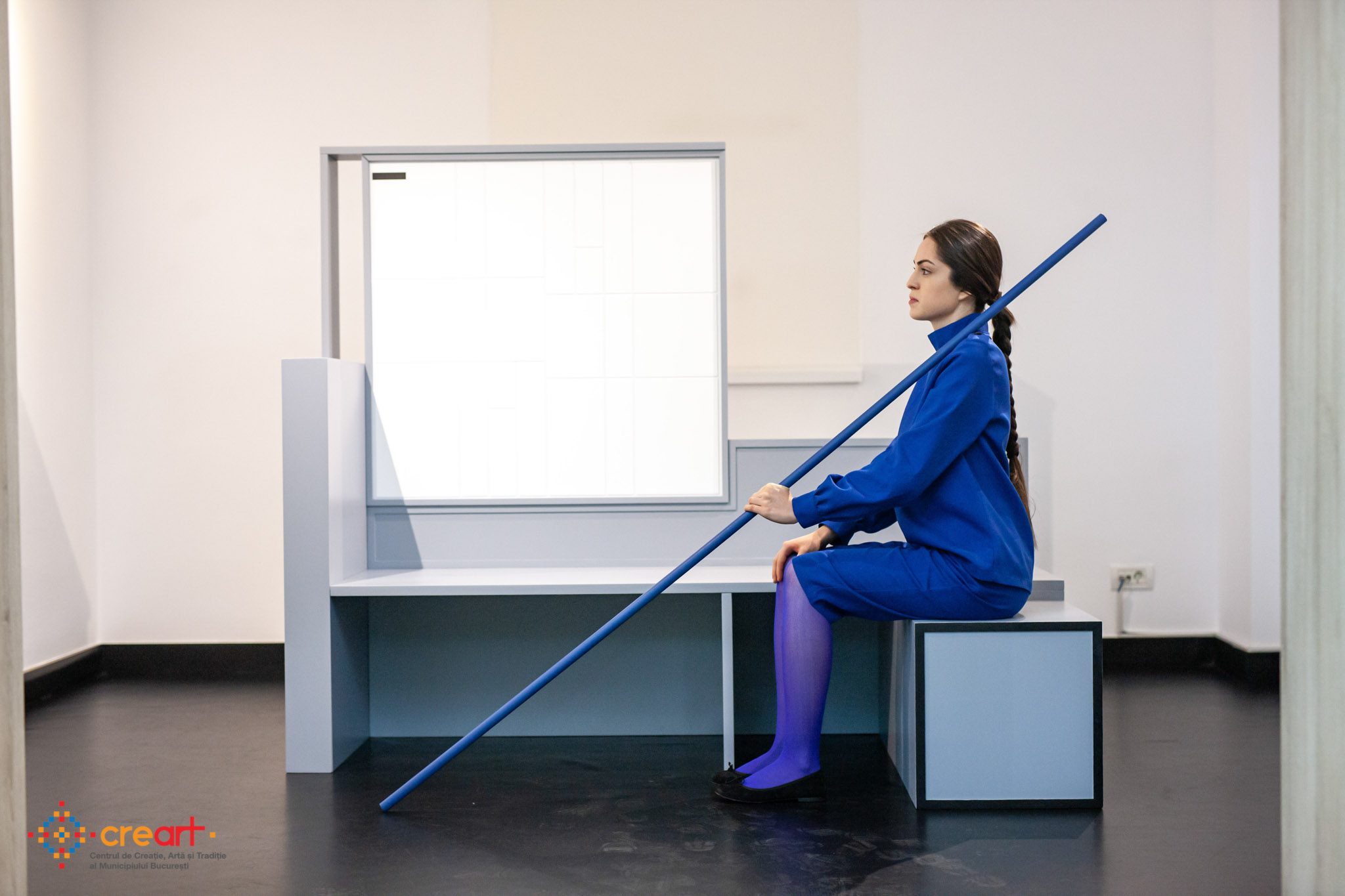 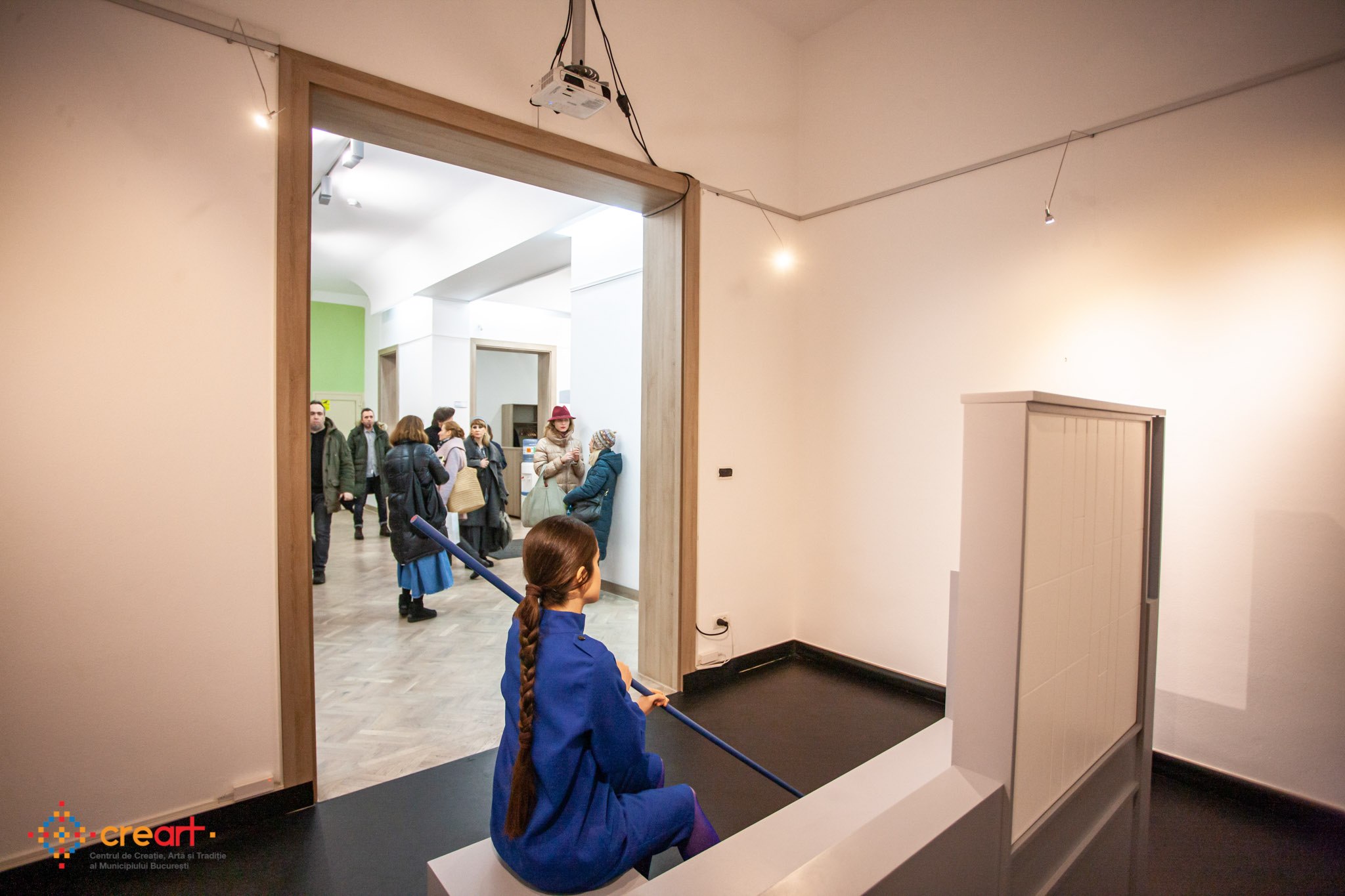 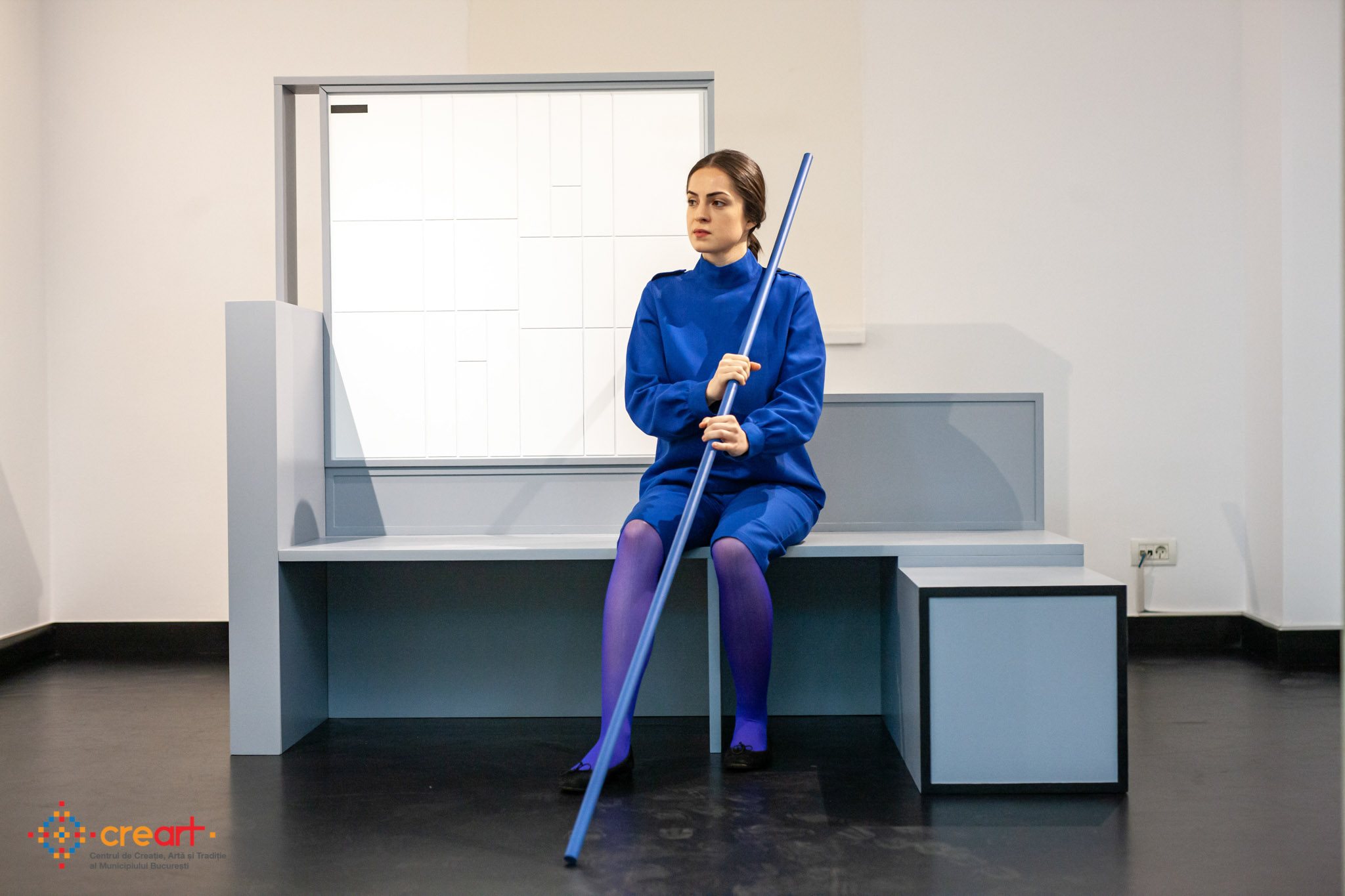 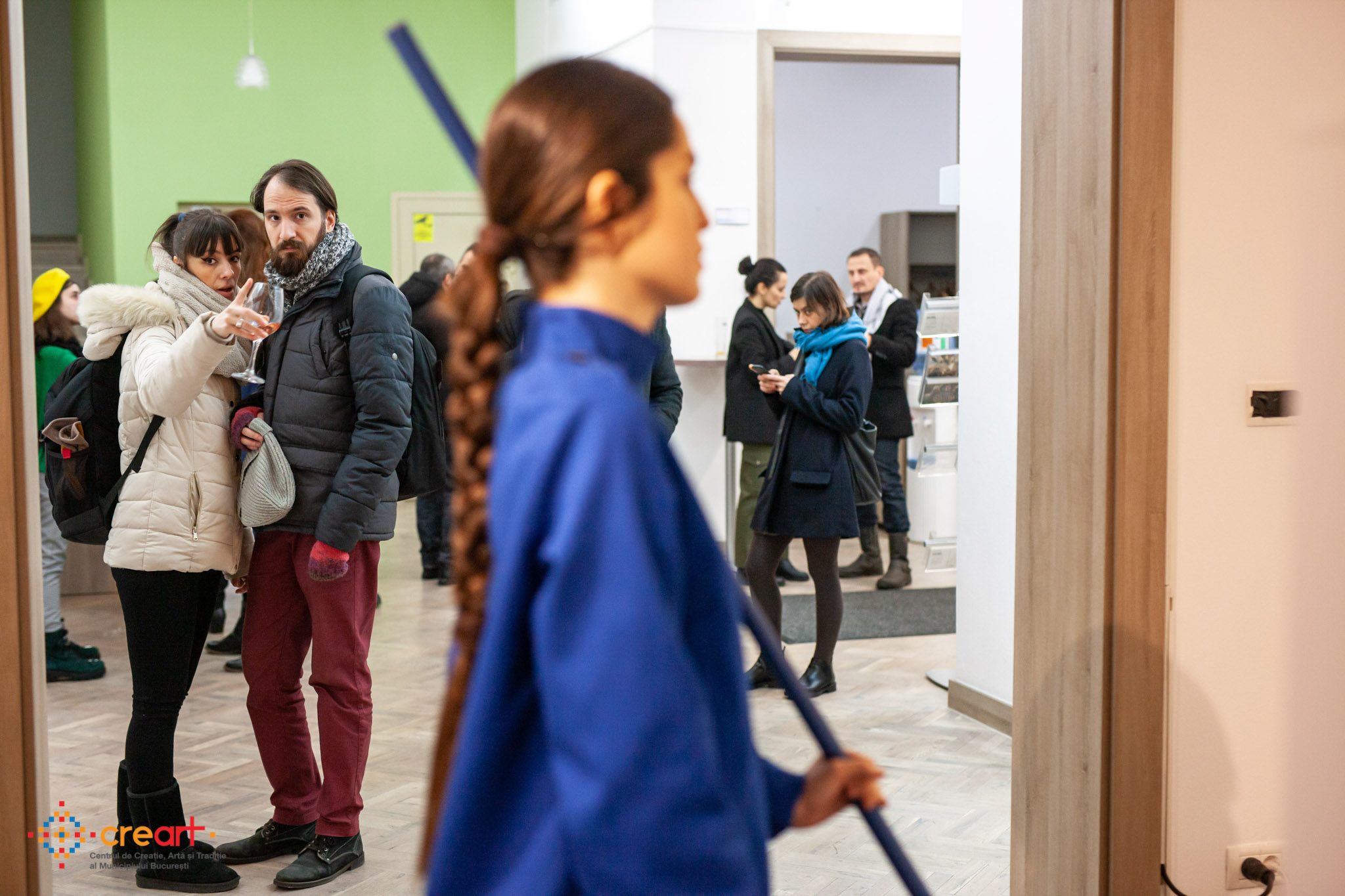 "Blue door is a work-in-progress project, part of an exhibition construction, named Apocalypse/Beatus, a photomontage series, inspired by Spanish Beatus from the 11th Century. Beatus are medieval Iberian manuscripts consisting of interpretations and commentaries on the Apocalypse of John or Book of Revelation. The apocalypse is a term that announces the end of this world but, at the same time, a new beginning, the ultimate happiness (after the tragic). Blue door talks about the interpretation of those terms in a performative manner, through an object and a human presence, searching for meditation. Blue door is a performance/installation inspired by the interior of the building where Arantxa Etcheverria has her artist studio, a house built by Marcel Iancu in 1934. Blue door continues the meditative explorations opened by Red Door: an architectural detail from Arantxa's studio will be rebuilt and used in a performance on the subject of apocalypse and promised happiness.“ (Eugen Rădescu)

Arantxa Etcheverria (born in 1975) is a French artist. She has studied visual arts at Villa Arson in Nice and scenography at the National Theatre in Strasbourg. From 2013 she is developing an artistic practice based on modern architecture inspired by her studio in Bucharest.  No matter if we speak about paintings, installations, videos or photomontage, all her works are the result of a very precise analysis of the space geometry. She has exhibited in Art Safari (2018), ArtEncounters (2017), Architectures, BARIL Gallery, Fabrica de Pensule, Cluj-Napoca (2016, solo); DADADA, Media Art Festival, Art Museum of Arad (2016); A Dialogue in Silence, Electroputere Club, Craiova (2016); Comedy, Art On Display Project, Musette Kube, Bucharest (2015, solo); Video Zoom Romania, Museo di Roma / Sala Uno, Roma (2015); Corner, Calina Gallery, Timișoara (2014, solo); Objects of Desire, Sabot Gallery, Fabrica de Pensule, Cluj-Napoca (2014); Studio/Structures, National Museum of Contemporary Art - – Annex, Bucharest (2013, solo); BB6 – Bienala Internațională de Artă Contemporană București (2013). She is represented by BARIL Gallery, Cluj-Napoca. She lives and works in Bucharest.

Eugen Rădescu is cultural manager, curator and theoretician, with background in political science (specialised on moral relativism and political ethics). He wrote for various magazines and newspapers. He curated, among others, Bucharest Biennale 1 with the theme “Identity Factories”, “How Innocent Is That?” , “presently i have nothing to show and i’m showing it!”  and "Common Nostalgia" at Pavilion Bucharest. He has published the book “How Innocent Is That?” at Revolver Book Berlin. He is co-editor of PAVILION – journal for politics and culture and co-director of Bucharest Biennale (with Răzvan Ion) and the chairman of the organisational board of PAVILION and BUCHAREST BIENNALE. He is a member of the selection board at apexart for the programs "Franchise" and "Unsolicited Proposal Program". He has held different lectures at several institutions such as apex, New York; Badischer Kunstverein, Karlsruhe; Casa Encedida, Madrid; University of Arts, Cluj. Also he is professor at Bucharest University and Babeș-Bolyai University, Cluj. He lives and works in Bucharest.